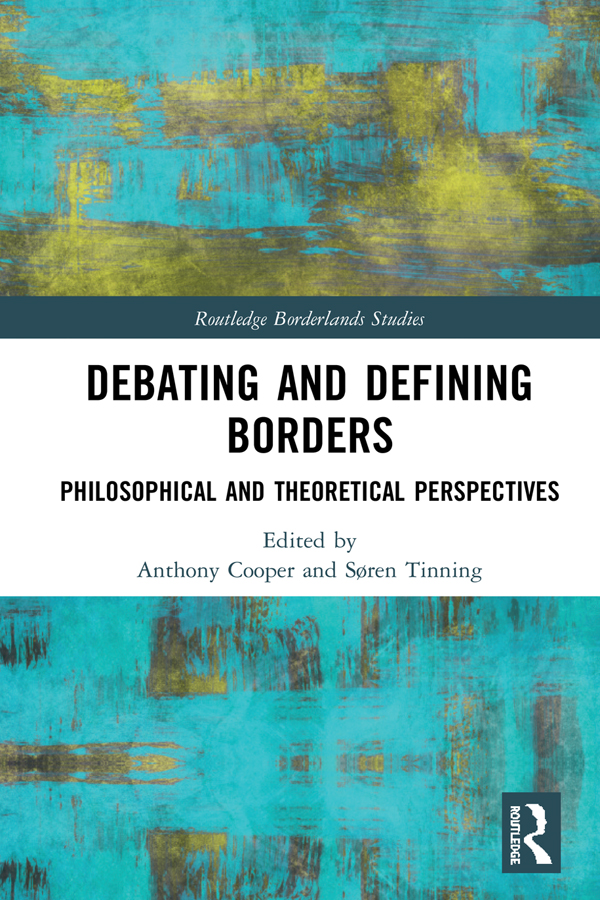 This book brings together insights from border scholars and philosophers to ask how we are to define and understand concepts of borders today. Borders have a defining role in contemporary societies. Take, for example, the 2016 US election and the UK Brexit referendum, and subsequent debate, where the rhetoric and symbolism of border controls proved fundamental to the outcomes. However, borders are also becoming ever more multifaceted and complex, representing intersections of political, economical, social, and cultural interests.

For some, borders are tangible, situated in time and place; for others, the nature of borders can be abstracted and discussed in general terms. By discussing borders philosophically and theoretically, this edited collection tackles head on the most defi ning and challenging questions within the fi eld of border studies regarding the defi nition of its very object of study. Part 1 of the book consists of theoretical contributions from border scholars, Part 2 takes a philosophical approach, and Part 3 brings together chapters where philosophy and border studies are directly related.

Borders intersect with the key issues of our time, from migration, climate change vulnerability, terror, globalization, inequality, and nationalism, to intertwining questions of culture, identity, ideology, and religion. This book will be of interest to those studying in these fields, and most especially to researchers of border studies and philosophy.

This chapter introduces a new process or movement-oriented “kinopo- litical” methodology for studying borders. In this I would like to argue against two common assumptions about how borders work: Borders are static, and borders keep people out. My argument takes the form of three interlocking theses about borders: (1) borders are in motion, (2) the main function of borders is not to stop movement, but to circulate it; (3) borders are tools of primitive accumulation. These three theses are then followed by a brief concrete example to illustrate them. These theses have major implications re-theorizing borders today, as I have shown elsewhere at length (Nail, 2016).
It is more important to study borders today than ever before. At the turn of the twenty-first century, there were more migrants than ever before in recorded history (10M, 2010; WHO, 2015) .2 Today, there are over one bil- lion migrants (UNDP, 2009, 21).3 Migration has risen by nearly 50 percent since the turn of the twenty-first century, and more than 56,000 migrants have died or gone missing worldwide over the last four years (Hinnant and Janssen, 2018). More than ever, it is becoming necessary for people to migrate due to environmental, economic, and political instability. In par- ticular, climate change may even double international migration over the next 40 years (IOM, 2009).4 What is more, the percentage of total migrants who are nonstatus or undocumented is also increasing, thus posing a seri- ous challenge to liberal democracies premised on universal equality (see Cole, 2000).5

In order to manage and control this rising global mobility, the world is becoming more bordered than ever before. In just the past 20 years, but particularly since the terrorist attacks of 11 September 2001 on the United States, and more recently the war in Syria, hundreds of new borders have emerged around the world: miles of new razor-wire fences and concrete security walls, numerous offshore detention centers, biometric passport databases, and security checkpoints in schools, at airports, and along vari- ous roadways across the world. All make manifest what has always been the true strategy of global capitalism and colonialism: to steal the world’s wealth and lock out the poor. “Europe has invaded all peoples; all peoples are com- ing to Europe in their turn” (Latour, 2018).

The recent rise in right-wing nationalism and xenophobia in the West is precisely a reaction to the so-called “migration invasion.” Borders are the new weapons being used to continue a war against the rest of the world. This is the context and importance of rethinking borders today…