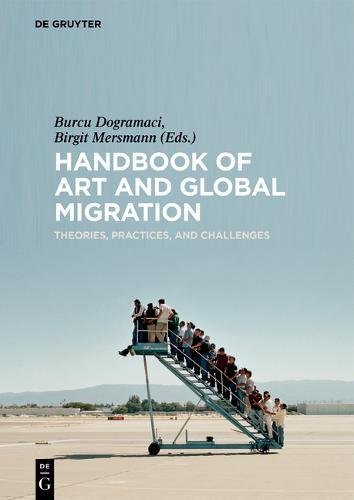 How can we think of art history as a discipline that moves process-based, performative, and cultural migratory movement to the center of its theoretical and methodical analyses?

With contributions from internationally renowned experts, this manual, for the first time, provides answers as to what consequences the interaction of migration and globalization has on research in the field of the science of art, on curatory practice, and on artistic production and theory. The objective of this multi-vocal anthology is to open up an interdisciplinary discourse surrounding the increased focus on the phenomenon of migration in art history.

Here is an extract from my contribution to the collection.

You can read the full chapter here: “The Migrant Image.” in Handbook of Art and Global Migration, ed. Burcu Dogramaci and Birgit Mersmann (De Gruyter Press, 2019); 54-69.

Migrant aesthetics
The mobile image and the centrality of the migrant mark a new period in aesthetics. The digital image is not only mobile by virtue of its form but by the mobility of its content and author. Some of the most shared and viewed images of the past few years have been digital images of migrants, refugees, and the conditions of their travels, and even their death. The image of Alan Kurdi, the dead Syrian 3-year-old is now one of the most influential images of all time. The popular media has been saturated with migrant images and has thus been confronted in a new and dramatic way with the visible lives and deaths of migrants.

Furthermore, the widespread access to cell phones with digital cameras has also made it possible for migrants and refugees themselves to generate more images of their own movement and experience than ever before. The itinerant, grainy, handheld, and “poor” images of migrant cell phone cameras have become their own film genera: the “wretched of the screen” (Steyerl 2013). In these videos migrants are not silent victims but creators of new aesthetic forms, “an imperfect cinema” (Espinosa 1979) as demonstrated in Elke Sasse’s 2016 film #MyEscape.

Cell phones have also become literal lifelines for migrants to obtain travel information in isolated areas, to share videos, sounds and images with friends, family, and authorities. The digital visua l and sonic images produced by migrants have become the material basis of the aesthetic threads that hold together numerous committees across borders, not just refugees. Although it is most obvious in the case of refugees, these are the same aesthetic lifel ines that make possible sustained social and informational communities around the world. The migrancy of the digital image is what allows for community in a world of global migration, continuous mobility, and displacement. What would global migration look like without without the migrancy of the image and the images of the migrant,

The migrant image thus marks the limits of the previous century and the outline of a new one defined by the mobility and migration of the image. This requires a new approach both to the politics of migration and the aesthetics of the image. However, the advent of the present is never limited to the present alone. Now that our present has emerged, it has become possible in a way it was not before to inquire into the conditions of its emergence and discover something new about the nature and history of art. in other words, the present reveals something new about the nature of sensation and what it must at least be like so as to be capable of being defined by the primacy of motion and mobility as it is. At no point in history has the image ever been anywhere near as mobile as it is today in the digital image.

So, what does this say about the nature of the image such that it is capable of this mobility? lf the image is defined by the primacy of mobility today yet existing theories of it are not, then we need a new conceptual framework. We need to produce such a new conceptual framework based on the primacy of motion to better understand contemporary sensation and aesthetics, as well as the historical events from which it emerges. in short, the rise of the mobile digital image draws our attention not so much to its radical novelty, but to a previously hidden dimension of all previous images throughout art history that can only now be seen (Hansen 2004; Hansen 2006; Manning 2012; Massumi 2007; Naukkarinen 2005; O’Sullivan 2001; Gregg/Seigworth 201 0).