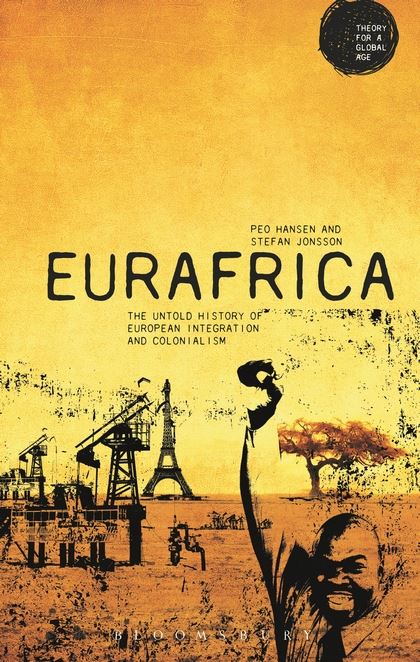 I am giving a couple talks in Sweden this week. Below is the first one given at Linköping University earlier today. Thank you to Stefan Jonsson and Peo Hansen for inviting me and sharing a copy of their book Eurafrica: The Untold History of European Integration and Colonialism (2014).

The twenty-first century will be the century of the migrant. At the turn of the twenty-first century, there were more migrants than ever before in recorded history. Today there are over 1 billion migrants. Migration has risen by nearly 50 percent since the turn of the 21st century and more than 56,000 migrants have died or gone missing worldwide over the last four years. More than ever, it is becoming necessary for people to migrate due to environmental, economic, and political instability. In particular, climate change may even double international migration over the next forty years. What is more, the percentage of total migrants who are nonstatus or undocumented is also increasing, thus posing a serious challenge to democracy and political representation.

In order to manage and control this rising global mobility, the world is becoming ever more bordered. In just the past 20 years, but particularly since the terrorist attacks of 11 September 2001 on the US, and more recently the war in Syria, hundreds of new borders have emerged around the world: miles of new razor-wire fences and concrete security walls, numerous offshore detention centers, biometric passport databases, and security checkpoints in schools, airports and along various roadways across the world. All make manifest what has always been the true strategy of global capitalism and colonialism: to steal the world’s wealth and lock out the poor. “Europe has invaded all peoples; all peoples are coming to Europe in their turn”(Latour).

The recent rise in right wing nationalism, xenophobia, and climate denial in the West is precisely reaction to the twin “invasions” migration and climate change. Borders are the new weapons being used to continue a war against the rest of the world. This is the context for rethinking a new theory of the border today.

If this thesis sounds seems outlandish, just consider how migrants are now being described in mainstream political discourse. In the US, people such as Samuel Huntington and Patrick Buchanan have worried about a ‘Mexican immigrant invasion’ of ‘American civilisation’. In the UK, The Guardian published an editorial on Europe’s crisis that ended by describing refugees as the ‘fearful dispossessed’ who are ‘rattling Europe’s gates’ – a direct historical reference to the barbarian invasion of Rome. In France, Marine Le Pen said at a rally in 2015 that ‘this migratory influx will be like the barbarian invasion of the fourth century, and the consequences will be the same’. Even the president of the European Council, Donald Tusk, has described the recent refugees with the same ‘dangerous waters’ and military metaphors used by Romans to depoliticize barbarians: refugees are a ‘great tide’ that has ‘flooded into Europe’ producing ‘chaos’ that needs to be ‘stemmed and managed’. ‘We are slowly becoming witnesses to the birth of a new form of political pressure,’ Tusk claims, ‘and some even call it a kind of a new hybrid war, in which migratory waves have become a tool, a weapon against neighbors.’ [/danger water/media image of ocean voyage/wet backs/Ammianus/child refugees]

Donald Trump has recently described the caravan of Central American refugees marching to the US as “an onslaught,” “an assault on our country,” and an “invasion,” repeating the words of Robert Bowers, who shot can killed 11 Jews in a Pittsburgh Synagogue for supporting the refugees. The Associated Press has called the caravan an “army of migrants” and a “a ragtag army of the poor.” Most recently Trump has said soldiers will open fire on the refugees if a migrant throws a rock.

In this paper I would like to argue here two correctives to two common ideas about how borders work: 1) Borders are defensive 2) Borders keep people out.

The two theses of this paper are the opposite of these assumptions: 1) Borders are offensive weapons of primitive accumulation, 2) Their main function is not to stop movement but to circulate it; I think these have major implications re-theorizing borders as I have tried to show by doing a history of border from the prehistoric to the present in Theory of the Border.

Borders are being used as weapons of primitive accumulation.

Climate change has disproportionately negative effects on poorer countries and people of color and disproportionally positive effects for receiving countries who benefit by a hyper-exploitable and precious “reserve climate labor army.” This asymmetry is the result of a long history of capitalist colonialism and racism, which is continued now through the bordered management of migration. Thus, contemporary global migration cannot be reduced to merely natural climactic causal explanations (Hulme 2011). The figure of the “climate refugee” is never simply fleeing climate change but is doing so under postcolonial conditions of geopolitical violence and racism. The term “climate refugee” itself serves to cover over the real kinopolitical conditions of social circulation at work that make such populations vulnerable to displacement in the first place.

Nationalism, xenophobia, and racism also play a structural role in the bordering process of primitive accumulation because they socially devalorize and thus cheapen the labor and lives of migrant workers. If migrants arrived but were not throughly racialized and discriminated, their labor would be too valuable for capitalist investment to bother appropriating them in the first place. Thus, capitalism wields climate change under a triple condition of  bordered colonialism: 1) The historical origins of recent climate change are in colonialism itself (oil from Africa, industrial production from slavery, and so on). 2) Colonized populations and indigenous people are disproportionately forced to move due to climate change, and 3) These same populations are racialized as dangerous barbarian boat people upon arrival (Moore, 2015; Goldberg, 2017; Giuliani, 2107).

But climate change, like primitive accumulation, is not just about the dispossession and appropriation of people and cheap labor. It is also about the direct appropriation of cheap or free land. The two go hand in hand. At the same time that climate change displaces people it also opens up previously occupied lands, waters, and forests to new privatized extractive and/or constructive industries. As the climate changes previously inaccessible areas will be opened up for expanding new markets (supplied with abundant cheap labor), including new security markets for new borders, fences, walls, drones, and all the rest (think of the privatization and gentrification of New Orleans after hurricane Katrina). In other words, climate change may not mean the end up capitalism, but may in fact be its rebirth or second wind through the use of borders.

If capitalism loves disaster why should we think climate change will necessarily mean the end of capitalism (Klein, 2007)? If anything can be commodified there is no absolute natural limit to capitalism, only relative limits or borders to profit. We are most certainly at the cusp of one of these limits today, which Jason Moore attributes to “the tendency of the ecological surplus to fall” (Moore, 2015). Everything and everyone that could be easily appropriated (oil, slaves, old growth forests, etc), was gobbled up during colonialism. The people who are left today want more money and more rights. The minerals left are too expensive to extract. This is why capitalists have increasingly retreated to financial speculation. If only there were a way, the capitalist dreams, to somehow cheaply dislodge huge amounts of people from their land, devalorize their labor through borders, and appropriate it. In other words, if climate change did not exist it would be necessary for capitalism to create it. Lucky for it, it does, because it did. Migrants today thus form a “form a disposable industrial reserve army, which belongs to capital just as absolutely as if the latter had bred it at its own cost.” (Marx 1972, 784).

The Border is a Process of Circulation

Borders are not well understood only in terms of inclusion and exclusion, but rather by circulation. In part this follows from the mobility of the border. Since the border is always in between and in motion, it is a continually changing process. Borders are never done “including,” someone or something. This is the case not only because empirically borders are at the outskirts of society and within it and regularly change their selection process of inclusion, as we said before, but also because exclusion is not synonymous with stasis. The exclusion is always mobilized or circulated.

In practice, borders, both internal and external, have never succeeded in keeping everyone in or out. Given the constant failure of borders in this regard, the binary and abstract categories of inclusion and exclusion have almost no explanatory power. The failure of borders to fully include or exclude is not just the contemporary waning sovereignty of postnational states; borders have always leaked. The so-called greatest examples of historical wall power⎯Hadrian’s Wall and the Great Wall of China⎯were not meant to keep people out absolutely. Rather, their most successful and intended function was the social circulation of labor and taxes. This continues today with the U.S.-Mexico border wall. The success rate of illegally crossing is around 90%, according to several studies. Most of the traffic across the border is related to economic regulation. Thus one of the main effects of borders is not keeping out but circulating bodies in a particular pattern: by criminalizing them, killing them, extracting a tax from them, and so on. [The US/Mex border is not a  failure, it just succeeds in other ways: funnel effect vs cage effect].

But border circulation is not just the ongoing process of dividing; its technologies of division also have a direct effect on what is divided. What is divided must be recirculated, defended, maintained, and even expanded, but at the same time what is divided must also be expelled and pushed away. Division is not simple blockage—it is a redirection. What is circulated does not stop after the division—it comes back again and again. Thus “it is the process of bordering,” as David Newman writes, “rather than the border line per se, that has universal significance in the ordering of society.” The border is the social technique of reproducing the limit points after which that which returns may return again and under certain conditions (worker, criminal, commuter, etc).

The border does not logically “decide,” as Agamben says. Rather, it practically redistributes. Undocumented migrants, for example, are, for the most part, not blocked out but rather redistributed as functionally “criminalized” persons into underground economies. Or an economic surplus is extracted from their incarcerated bodies as they pass through the private detention industrial complex ($200 per bed for years). They are released just on the other side so they may go through the process again, creating a whole regime of social circulation [deportation industrial complex].

[Ex of cutting soles (french cut the soles of Italian migrant’s shoes, then ship them back south to return again]

However, since the border is not a logical, binary, or sovereign cut, its processes often break down, function partially, multiply, or relocate the division altogether. Instead of dividing into two according to the static logic of sovereign binarism, the border bifurcates by circulation and multiplication. The border adds to the first bifurcation another one, and another, and so on, moving further along. Instead of “the sovereign who decides on the exception,” as Carl Schmitt writes, we should say instead that it is “the border that circulates the division.”